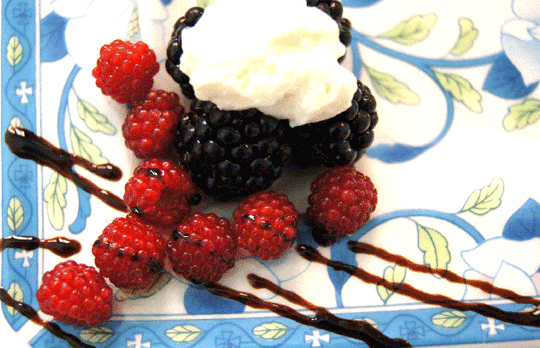 Thanks to the contest Kitchen Ticket i had the opportunity to participate in the first edition organized by  MyChefTVspending a day in an excellent place.


Departure from home (Cureglia, Switzerland) at 05:30. In the morning she presented with low temperature, haze and it was not yet dawn. I had not slept much for the agitation, or because i did not know what to expect.
The TomTom navigator is indicating 256 km, arriving time around 08:10. Some say not to rely too much on those gadgets - mine brought me to the exact street number. closest to destination despite having updated the map. At this point, a complaint to the quys of TomTom and ViaMichelin because i lost another 2 minutes until destination. It’s not the fact of the time but I simply hate being late having appointments. However, after waiting for 45 minutes because of an accident on the highway near Peschiera, finally i arrived two minutes before the time set for 09:00 am.

Arrived at  Musella street nr. 130, coming along the long yard, i have to say that the industrial area as the entrance of the restaurant do not leave at all to imagine that excellence inside the building with 50 seats, its bakery and wine cellar.

Meeting and presentation with MYCHEF.TV managers to focus on the day and chat with these nice folks. However it was useless having such an agitation, all proceeded in a quiet, welcoming and friendly way. And I’ll tell you more: we were the protagonists, me and the two girls owners of the Kitchen Ticket.

At 09:30 am the meeting with the Chef Giancarlo Perbellini. A very friendly Person and
in my opinion, a high quality professional. He always had time for his guests, even
between his daily commitments.. I've never written a review about it but both he and Mrs. Perbellini in collaboration with the whole team deserve a third star for their professionalism and
willingness.
Another highlight was the arrival of the fisherman with the raw materials such as bream, snapper, St. Peter fish etc. I thought I had already seen big breams but those specimens for sale exceeded my imagination. At this point I would like to specify the obligation of the operators in the food industry about the consumption of raw fish, the Anisakis. In fact, the St. Peter fish arrived gutted.
We then moved on to cleaning, that is, with the special pliers to remove the feathers under the skin of the Germans.. The person in charge will take several hours for this laborious undertaking - I've cleaned 2 of it, before the live interview!
After that the preparation of dried tomatoes, for the pizza.The quantities are around 100 pounds (uncooked) per week. I tried the final product, congratulations for the brine prepared by the cook!
The lunchtime after an educational morning , started around 1 pm with sesame wafer and sea bass tartare, and goat cheese, it was brought than a spoon dipped in liquorice, it was a unique flavor.
Afterwards Saffron Risotto and buffalo cheese, an  amazing.taste.
And the second: Veal cheek braised, mashed potatoes and fried leeks, you do not know what to add! I've enjoyed with my eyes closed!
Finally, we are surprised with their famous pastry puff pastry and stracchino cheese which they modestly call them fun, but all are absolutely art works such as the preparation of different types of bread, persimmon jelly in the custard, the apple cakes, sponge cake with almonds and more.
In my particular interest was among other things, the copper pots. There were those who reported non-stick qualities, and who remembered the difficulties to manage the cooking temperature:
Well, having never used that object in the kitchen i think it's appropriate that everyone has to make his/her own experiences .
And then, unfortunately, the cordial greetings of the Chef Perbellini, which in addition to having indulged us, gives us another delicious dessert of its own production!
If you have the chance to go, I recommend it, do not miss this place of excellence, I would get back there tomorrow.
Pubblicato da Unknown a 14:40
Invia tramite emailPostalo sul blogCondividi su TwitterCondividi su FacebookCondividi su Pinterest
Etichette:Homepage Posts in english

I miei altri Blog/My other Blogs